Why, it’s a RAT BUG! And yes, it is real and it’s even in style. There is a definition for it in the VW Samba Forum Dictionary: “Rat Look - Distinct VW ‘Look’ characterized by visible rust and an extreme lowering job. Usually performed on a rusty or otherwise unrestorable VW.” 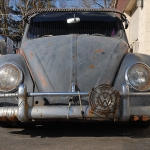 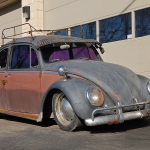 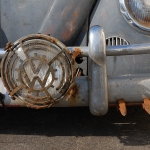 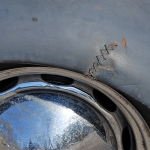 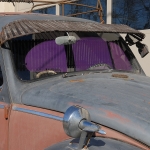 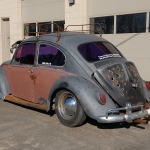 2) The “extreme lowering job” mentioned above looks cool but it leaves Rat Bugs undriveable. An impact from even the smallest speed bump would destroy the suspension. So, what’s the answer? Air suspension powered by an electric compressor is the answer. How cool is that?

This Rat Bug was towed to Motor Works from Batavia. We performed partial repairs on the brakes, gearshift, steering and enough other areas so the owner could drive it back home. Limited funds (a problem we all have) prevented a major restoration but towed in and driven home means a whale of a lot of progress.

I must admit to a fondness for the “rat look”. It is so outrageous with its touches of Mad Max, it’s hard not to smile. The public was equally intrigued. I fielded many questions on our Rat Bug, including a telling question: “Is it for sale?”

Nope. Sorry. The Rat Bug is back home, warm and safe, eagerly awaiting its next outing, and another chance to turn every head that sees it.

P.S. The bullet holes in the engine cover are a great touch.