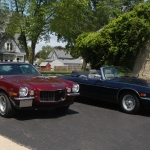 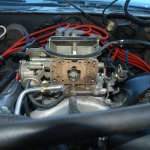 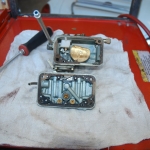 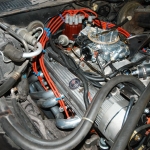 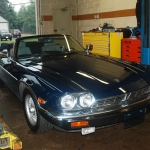 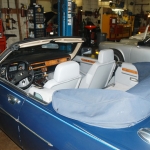 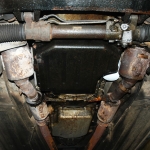 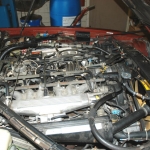 American vs. British muscle cars: 1973 Camaro Z28 350 and 1989 Jaguar XJS V-12. The Camaro gets new headers, ignition and carburetion plus extensive tuning. The overheating Jaguar gets a new radiator, hoses, belts and engine seals. This requires removing the hood and large parts of the front of the car.

The Camaro story takes a number of twists and turns. The car came to us with a very rough idle. After checking the basics; dwell, timing, compression, scoping the engine, etc. we determined the engine was running lean (too little gas or too much air) at idle. This was further proven by “sniffing” propane into the Holley carburetor. The rough idle disappeared instantly.

Adjustment of the carb, blocking off vacuum hoses, and pressurizing the engine with smoke to see vacuum leaks all showed no problem.

We went back to the carburetor, partially disassembled it, cleaned the idle passages, and checked the float and the block. Reassembly and readjustment showed no improvement.

There remained a glimmer of an idea as yet unchecked. To adjust idle mixture richer on this Holley carburetor you had to turn the idle mixture screws in. This is the exact opposite of every other Holley and indeed every other carburetor I can think of. The screws were turned in to their maximum position, yet the carb would idle no richer. There was something basically odd about this carburetor.

We called the Holley Technical Line and received a warm reception and close to an hour’s worth of help and information.

It turns out this particular carburetor is a special emission control carb built as a bolt on replacement for the engine’s original Quadrajet. It is severely limited in its adjustability and is not built as a performance carburetor. The only fix is to replace the carburetor.

At last we had an answer and with Holley’s help, a willing customer and our head technician Mark Huff’s extensive high performance experience we would create something special.

The first step was ignition. This car would get a Petronix electronic ignition and coil, and high performance cap, rotor and wires. The second step would be a great set of ceramic coated headers tuned for this engine and carburetor. The third step was a new Holley Street Avenger 670 Carburetor. This carb is designed for this exact engine. The last step is the hardest but most fun. We spent several hours out on the road final tuning the timing and carburetor jetting to meet the motor’s exact needs.

The finished product is “one scary ride”, a very happy customer, and a Motor Works Staff able to bask temporarily (I figure about three minutes until the next problem car) in a job well done.

Stunning V-12 Jaguar XJS came to us much in need. An intermittent no start, engine overheat, oil leak, bad wheel bearing and coolant leak were making the car undriveable.

The intermittent no start required hours of tracing, complete disassembly of the center console and replacement of the neutral safety switch.

The overheat problem is common with the XJS. A new radiator, fan clutch, thermostat, hoses, belts and a cooling system flush would correct the problem. Access to these parts requires removing the hood and substantial portions of the front of the car. See image 8 for a repeat performance on another XJS.

The engine was washed and the oil leaks identified. They unfortunately proved to be too expensive to fix on this visit.

Finally, new rear wheel bearings and replacing the leaking heater water control valve put our beauty back on the road.