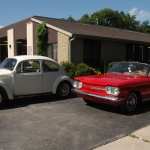 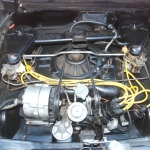 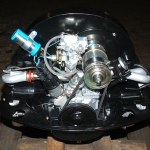 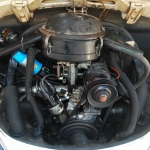 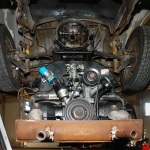 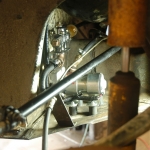 Lovely 1967 Beetle gets a new engine, but that’s just the half of it. The restoration on this daily driver has continued for the last five years. Each visit has addressed the car’s needs at the moment. This, interestingly, has changed the theory of an actual restoration. Instead, it is the chronicle of repairs required to keep an older finicky car on the road as primary transportation.

Fourth visit – minor, early July 2008: The car will not restart well on hot days after driving long distances and shutting off the engine. Considerable diagnosis and research shows the fuel system is vapor locking. Old hot running air cooled engine and modern gas with 10% alcohol is causing the fuel to boil in the lines and pump when the engine stops and “heat soaks”.

Build and install electric fuel pump conversion using Holley racing pump and regulator. From extensive experience we have found the Holley low pressure regulator is the only part on the market that consistently meters 2.5 psi fuel pressure to the many small engines that require this conversion. We also relocated the fuel filter to the front of the car to prevent further vapor lock exposure. Bug goes home happy!

Fifth major visit late July 2008: Much sadness, woe and chin quivering. Our beloved Bug has returned with a blown head gasket, making a horrendous racket. What’s worse, that same cylinder is leaking oil badly where it connects to the engine block. We suspect the head studs have pulled loose on that cylinder causing both problems. The engine will need to be replaced. We use a rebuilt motor from JCS (sold thru Mid America Motor Works). This motor is completely reconditioned and has dual intake ports vs the original single intake port. It also has a larger carburetor and improved cooling. The end result is the strongest running VW Beetle we have ever seen. There is some hesitation when driving a cold engine (common), but otherwise it runs great. Bug goes home happy! BUT IT WON’T LAST!

Sixth visit – minor, July 2009: Install modern three point retractable seat belts in place of breaking original belts. Sixth major visit and subsequent visits starting August 2008: Our Bug is back intermittently dying and running rough at idle. And, this begins the saga of curing one of the hardest drivability problems we have ever faced. All the worse, Motor Works is known as a “Drivability Shop” and other shops refer cars they can’t fix to us.

Each time we work on the car it again runs like a champ. It then goes home and a few days or weeks later the problem has returned.

We repeatedly test fuel pressure, volume and alcohol content. The ignition is scoped, and base and mechanical advance timing are checked. We constantly check valve adjustment and compression. We overhaul the new carburetor and then replace it. We replace the distributor, coil and wires. We smoke test the intake system and engine for vacuum leaks. Dozens of other tests and procedures are tried.

We consult the best air cooled VW experts in the industry and perform further testing based on their advice. Each time the car leaves running well and returns dying and idling rough.

During this process we have had constant communication with the engine builders. After much thought we now go to the last extreme. There has to be some defect in the new motor. Perhaps something subtle like crank to cam timing off one tooth. We remove the engine and send it back to the builders. They perform a complete teardown, inspection and re-rebuild the engine from the ground up. They claim they could not find a problem.

However, from the moment we reinstalled and started the re-rebuilt engine it felt different. Better different. Stronger and smoother idle, less hesitation cold, possibly even more horsepower. This is what we wanted. This is what the customer deserved.

So ends the saga of the “Temperamental Bug”, but I must make a final note or three.

Our deepest thanks go to our customer. He was always patient, understanding and calm. He knew we would not rest until the problem was resolved and did not pressure us as to the time it required. He is also a businessman and knows we “lost our shirt” on this job. He saw that fixing the car right was a question of honor long after profit had turned to loss.

The big story is over but the Bug still comes here for window repairs, oil changes and all the little things that keep a daily driver on the road. We worked on the car two weeks ago and our commitment remains the same.