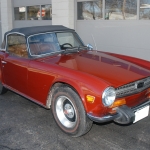 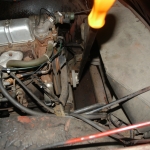 1974 Triumph TR6 was at several other shops with a locked up motor. They failed! Motor Works not only freed the engine but made it purr again.

We removed the radiator, belts, pulley, etc. for access. The cylinders (plugs out) were filled with penetrating oil and air charged to distribute the fluid. The biggest pry-bar we could find was put on the engine and we just “worried” the crankshaft back and forth. Finally, when I wasn’t sure who was going to win (the engine or me) the engine budged just a fraction. Over the next several minutes that fraction turned into ¼, then ½ inch of rotation. Finally the engine gave up and rotated freely. But, this is just the start of the story. Once the engine was running we found the clutch disc was seized to the flywheel. The details on how we surmounted this and other obstacles will come soon.