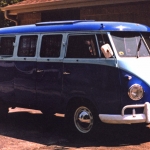 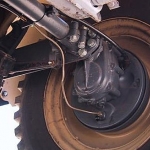 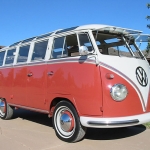 This super clean 1961 VW Bus came in so long ago (over 20 years) that its records have disappeared and exactly what we did to it has become fuzzy in our minds. I personally remember general steering, suspension, charging system and carburetor work, but not the interesting details.

Some details I do remember:
This was my first introduction to VW rear gear reduction drive. VW added gear cases to each rear wheel to gear down the underpowered engine for low end pull. This, of course reduces top end speed but is a fair trade off. See sample picture.

This van was also produced as the famed Safari Edition. This includes certain venting and other minor options, but most notably includes dual front windshields that open. See sample picture.

Only 22,754 VW Busses were produced in 1961 worldwide. Far fewer made it to the United States and fewer still had the Safari Package. I would like to visit this rare bird again.