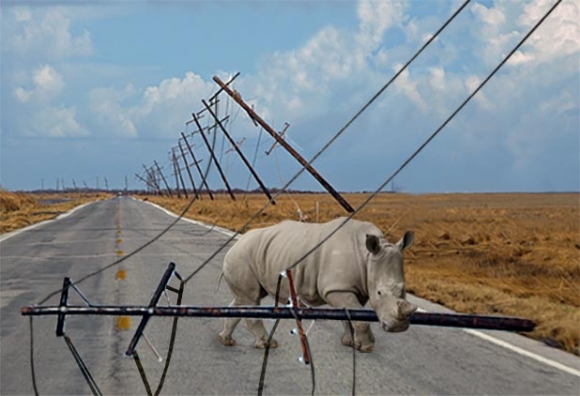 I have a pet rhinoceros. Her name is Giggles and she is as cute as a button. But upon rare occasion, Giggles can sometimes be quite a handful.

Recently a friend suggested I teach Giggles how to play “fetch”. Well, upon first consideration that seemed like a great idea. I mean who could argue with exercising your pet rhinoceros? So one day I grabbed a tennis ball, and Giggles and I marched out into an open field surrounded by country roads. I gave the tennis ball a mighty throw. Then I yelled “Giggles…Fetch!” Giggles immediately started to run in the direction I had thrown the tennis ball. Hey, I thought. This is really working well.

But I had forgotten a critically important fact about rhinoceri (note, rhinoceri is the plural of rhinoceroses). These prehistoric cuddly little critters can’t see past the nose on their adorable faces. That means once a rhino is under a full head of steam they will veer towards the first, largest object that catches their attention. In Giggles case, “fetch” ended up meaning the local power grid went down for the next 24 hours.

To be honest it could have been worse. The line repairmen all wanted to pet Giggles and feed her popcorn, her favorite treat. So at least nobody was mad over Giggle’s “incident!” But I haven’t gotten the Commonwealth Edison bill yet for all the cleanup. I have a feeling I’m going to be washing dishes in the ComEd cafeteria for quite a few years to come. But like I said, it could have been worse. The ComEd cafeteria gig means my lunches will all be free. YIPPIE! Marty Out-